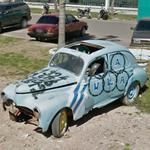 By adrbr @ 2012-08-13 18:12:04
@ -33.692955, -53.449689
Chuy, Uruguay (UY)
In 1924 the Uruguay team traveled to Paris to become the first South American team to compete in the Olympic Games. In contrast to the physical style of the European teams of the era, Uruguay played a style based around short passes, and won every game, defeating Switzerland 3–0 in the gold medal match. In the 1928 Summer Olympics Uruguay went to Amsterdam to defend their title, again winning the gold medal after defeating Argentina 2–1 in the final. FIFA assumed the responsibility of the organization of the Football Games to be played by FIFA rules and the tournaments would be recognized as World Championships. It only happened twice (1924/1928 Summer Olympics Games) until the creation of it own FIFA World Championship (FIFA World Cup) in 1930.
Links: en.wikipedia.org
777 views