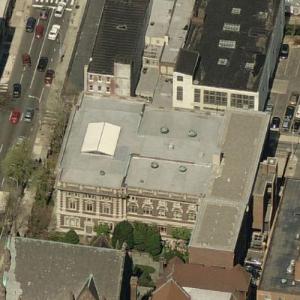 Some of the more interesting pieces of the collection are wax model of a woman with a human horn growing out of her forehead, the tallest human skeleton on display in North America, a 5'-long human colon that contained over 40 pounds of fecal matter upon its removal, the petrified body of the mysterious Soap Lady, a malignant tumor removed from President Grover Cleveland's hard palate, the conjoined liver from Siamese twins Chang and Eng Bunker, and a growth removed from President Lincoln's assassin, John Wilkes Booth.

The museum is named after Thomas Dent Mütter, retired Professor of Surgery at Jefferson Medical College, who in 1858 presented his personal collection of unique anatomic and pathological materials to The College of Physicians of Philadelphia

Besides being home to the Mütter the building also houses The College of Physicians of Philadelphia which, founded in 1787, is the oldest professional medical organization in the United States.
Links: power.networksolutions.com, en.wikipedia.org
955 views