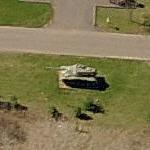 By kjfitz @ 2008-08-22 12:58:49
@ 40.927572, -81.447969
Akron, Ohio (OH), US
The M4 Sherman was the primary tank produced by the United States for its own use and the use of its allies during World War II. Production of the M4 medium tank exceeded 50,000 units and its chassis served as the basis for numerous other armored vehicles such as tank destroyers, tank retrievers, and self-propelled artillery. In the United Kingdom the M4 was dubbed the Sherman after Union General William Tecumseh Sherman, following the British practice of naming its American-built tanks after famous American Civil War generals. Subsequently the British name found its way into common use in the US. Following World War II the M4 medium tank was used by the US until the end of the Korean War. Many nations continued to use the tank in both training and combat roles into the late 20th century.
Links: en.wikipedia.org
844 views