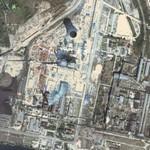 By Dania @ 2010-09-27 17:39:06
@ 42.156341, 25.910225
Galabovo, Bulgaria (BG)
Maritsa Iztok-1 is located near Galabovo. In October 1998, the old power plant with a capacity of 500 megawatts (MW) was privatized and sold to Consolidated Continental Commerce (3C), later purchased by AES Corporation. On 15 February 2000, AES and the Bulgarian grid operator Natzionalna Elektricheska Kompania EAD (NEK) signed a 15-year tolling agreement, according to which AES has an obligation to replace the old power station with a new facility.

In June 2006, AES started construction of the new 670 MW power station, which costs €1.2-1.4 billion. It will be the first large-scale power plant to be built in Bulgaria in the last 20 years, and the single largest foreign investment in Bulgaria and one of the largest green field investments in South East Europe. The new power station will consist of two pulverised coal boilers of 335 MW each, two steam turbines, two generators and desulphurisation facilities. The first unit should be ready in mid-2009, and the second unit should be ready six months later. The plant will be constructed by Alstom.
Links: en.wikipedia.org
646 views