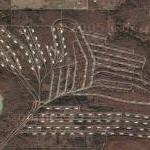 By kjfitz @ 2005-06-23 11:15:22
@ 34.824429, -95.946693
McAlester, Oklahoma (OK), US
For years, ammunition was stored at secure bunkers at McAlester Army Ammunition Plant. When needed, trains could pull up to the bunker and ammunition was offloaded for transport to parts unknown. But that isn't fast enough any more. To fix the problem, some 1,800 citizen-soldiers rotated through McAlester from April to August 2001 as part of an exercise dubbed "Golden Kastle." These soldiers used their construction skills to build and enhance roads, and extend loading docks so that tractor-trailer trucks can also assist in the loading process.
Links: www.globalsecurity.org
1,205 views