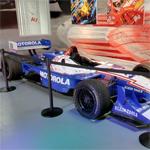 Andretti won 42 races and the 1991 season championship in his CART IndyCar career. He is the son of the legend Mario Andretti and the father of IndyCar driver Marco Andretti. He has continued in the sport as a team owner and race promoter.
Links: en.wikipedia.org
498 views