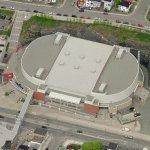 From 2001-05, this was home to the Maple Leafs AHL minor league hockey team. After the Leafs moved, the Fog Devils major junior hockey team played here until moving to Montreal in 2008.

The building has held several major concert acts and hosted the Juno Awards in 2002 and 2010.
Links: mileonecentre.com
602 views