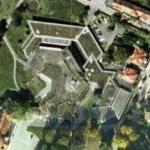 The museum opened in September 2006 and was designed by the British architect David Chipperfield and constructed at a cost of €10 million by Leonard Weiss GmbH with engineering by Ingenieurgruppe Bauen.

The museum stands on a rock plateau in Marbach's scenic park, overlooking the valley of the Neckar River. It displays and archives 20th century literature. Notable original manuscripts include The Trial by Franz Kafka and Berlin Alexanderplatz by Alfred Döblin.
Links: en.wikipedia.org
858 views