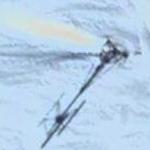 In 1981, the first Georg von Neumayer Station in the Antarctic was established on the Ekstrom Ice Shelf as a research observatory for geophysical, meteorological and atmospheric chemistry measurements, as well as a logistics base for summer expeditions. Georg von Neumayer, whom the station is named after, was an important patron of Germany's research activities in Antarctica. Ice movements and heavy snow deposits demanded the construction of a new station building in the early 1990s. In March 1992, the new Neumayer station was completed only ten kilometres from the original site. The station's research and observation programme has steadily expanded ever since and now includes monitoring of atmospheric ozone.

The snow-covered Neumayer Station is located on shelf ice 200 metres thick and almost completely flat. All that is visible from the distance are the towers of the station entrance, which project several metres above the snow. The shelf ice margin, destination for supply ships, is ten kilometres away. The station consists of two parallel steel tubes, each eight metres in diameter and approximately 90 metres long, which accommodate containers with living quarters, a kitchen, a mess, a hospital, various laboratories, workshops, a radio operator room, sanitary facilities, two power supply stations and a snow-melting plant.

Another transverse tube of similar length contains storage, waste and fuel containers, as well as space for vehicles. A tunnel links the main station with a special garage for all station vehicles, ranging from motor sleds to a rotary snowplough.


The station's power supply comes from diesel generators, the waste heat from which is used for the heating system and for melting snow. A 20 kW wind generator is an innovative and eco-friendly source of energy in Antarctica. When the station was being designed, the requirements laid down in the new Protocol on Environmental Protection to the Antarctic Treaty were adhered to, e.g. through the use of environmentally neutral construction materials, catalytic converters for the diesel generators and oil collecting equipment for the oil tanks. Waste is routinely collected and shipped back to Germany once a year.


Nine or at most ten people live and work at Neumayer Station during the Antarctic winter: a medical doctor who also acts as the head of the station, a meteorologist, an airchemist, two geophysicists, an engineer, an electrician, a radio operator/electronics engineer and a cook. Each team overwintering at the station stays there for 14 to 15 months. For nine months of that time, their only link to the outside world is by radio.
Links: www.awi.de
3,124 views