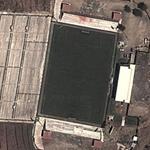 Envisioned to be built as the most modern stadium in Central America, funding has fallen short and the stadium is being built in stages. As of April 2011, only the first stage is complete thus far.
Links: en.wikipedia.org
524 views