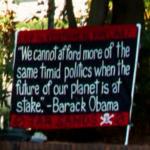 The movement's initial October 6 March drew an estimated 10,000 to Pioneer Courthouse Square. The protesters later set up an encampment in the Plaza Blocks Park near Portland City Hall. The Plaza Blocks include Lownsdale Square on the north side and Chapman Square to the south, which were the focus of the encampment.