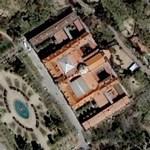 By DonMartini @ 2006-05-10 03:17:09
@ 41.388054, 2.189139
Barcelona, Spain (ES)
The Parliament of Catalonia is one of the institutions that form the Generalitat de Catalunya, together with the Presidency of the Generalitat de Catalunya and the Executive Board or Government. It represents the people of Catalonia, and is at present formed by 135 deputies, who are elect by universal suffrage.

The first Catalan constitutions are of the Corts of Barcelona from 1283. The last ones were promulgated by the court of 1702.
650 views