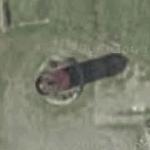 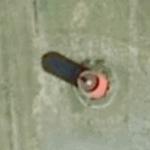 One of the more positive moments took place in 1970 when President Nixon came to town to light the "Peace Candle." He was still enormously popular with the less afluent and and this was before he became a convicted felon for his part in Watergate. The event took place on what was previously a farm owned by the Scharf family. Brocks bought the propery and built a candle factory there which was quite successful. As a way of drawing attention to their enterprise, they ran a natural gas line up through the center of an existing silo on the property and put thousands of gallons of wax on the outside of the silo. President Nixon used his famous quote, "There shall be peace in our time," as he lit the flow of natural gas. A freak gust of wind blew the flame back towards the president and his eyebrows were partially singed. Ever the trooper, he continued undaunted with the ceremony. Ironically, the intention was for the candle to be "eternal", but when the natural gas bills started to come in, the candle became "terminal".
Links: www.dalejtravis.com
515 views