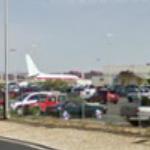 By Mike1989 @ 2012-04-16 12:37:36
@ 36.093533, -115.16707
Las Vegas, Nevada (NV), US
Janet is the de facto name for a small fleet of passenger aircraft operated for the United States Air Force. Their aircraft transport military and contractor employees and currently serve mostly the Nevada National Security Site (most notably Area 51) from their terminal at Las Vegas' McCarran International Airport. The origin of the term "Janet" (Just Another Non-Existent Terminal) is obscure but it is used as a radio callsign.
Links: en.wikipedia.org
2,758 views