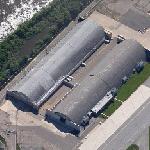 By Mike1989 @ 2014-04-17 07:50:35
@ 44.941511, -93.06133
St Paul, Minnesota (MN), US
The Riverside Hangars are semi-cylindrical-shaped hangars for aircraft installed at Saint Paul Downtown Airport in 1942, immediately adjacent to the Mississippi River. Their important design features are their low-cost and that they were erectable quickly by unskilled workers. In Saint Paul, Minnesota, during World War II, Northwest Airlines employed up to 5,000 people at the site, modifying new B-24 Liberator bombers, some of which received the highly classified H2X radar, which proved to be an invaluable tool in the European theater. Due to frequent flooding, proposals have been introduced to build a flood wall on the riverbank, but opposition and cost have thus far squelched the plans.
Links: en.wikipedia.org
349 views