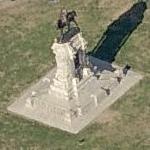 By voldude123 @ 2007-05-23 21:32:31
@ 37.553879, -77.460245
Richmond, Virginia (VA), US
The Lee Monument was the first and largest of the street's monuments. In 1876 the Lee Monument Association commissioned the adaption of a painting done by artist Adalbert Volck into a lithograph. The lithograph, depicting Lee on his horse was the basis for the the bronze statue created by French sculptor Marius Lean Antonin Aercie. (The horse was not Lee's favorite wartime horse, Traveller, as some believe.) The cornerstone was placed on October 27, 1887. The statue was cast in several pieces separately and then the assembled statue was displayed in Paris before it was shipped to Richmond where it finally arrived by rail on May 4. Newspaper accounts indicate that 10,000 people helped pull four wagons with the pieces of the monument. The completed statue was unveiled on May 29, 1890. The statue serves as a traffic circle at the intersection of Monument Avenue and Allen Ave (named after Otway Allen, the developer who donated the land to the association.) Lee stands 14 feet high atop his horse and the entire statue is 60 feet tall standing on a stone base.

The site for the statue was originally offered in 1886. Over some opposition, the offer was accepted and later withdrawn when opponents complained that the $20,000 for the Lee Monument was inappropriate because the site was outside the city limits. Richmond City later annexed the land in 1892, but the Depression meant that the Lee Monument stood alone for several years in the middle of a tobacco field before development resumed in the early 1900s.

The Lee Monument is a focal point for Richmond (most popular online maps depict the "Lee Circle" as the center of Richmond although the Virginia Department of Transportation uses the state Capital as its center). In the 1930s the woman called the local newspaper to report that Lee's horse was foaming at the mouth. In 1992, the iron fence around the monument was removed (in part because drivers were unfamiliar with traffic circles and would run into the fence from time to time and force costly repairs). When the fences came down, the stone base became a popular sunbathing spot for those in bikinis. In December, 2006, the state completed an extensive cleaning and repair to the monument.
Links: en.wikipedia.org
11,837 views