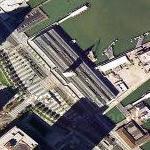 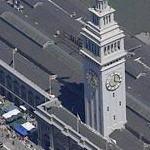 By kjfitz @ 2005-06-26 13:14:00
@ 37.796113, -122.393725
San Francisco, California (CA), US
Opening in 1898 on the site of the 1875 wooden Ferry House, the Ferry Building became the transportation focal point for anyone arriving by train from the East, as well as from all the East Bay and Marin residents who worked in the city. From the Gold Rush until the 1930s, arrival by ferryboat became the only way travelers and commuters—except those coming from the Peninsula—could reach the city.

In 1892, a bond issue to build a new Ferry Building was passed by the voters of California. A young architect named A. Page Brown drew up plans for a large, steel-framed building. His original proposal was for an 840-foot-long building. However, when the construction estimates came in for the foundation (of pilings and concrete arches) the actual length had to be reduced to 660 feet by removing planned twin entrances at either end. As it was, Brown's foundation—which has supported the entire steel-framed structure in such a remarkably dependable manner through two earthquakes (1906 and 1989)—became the largest such foundation for a building over water anywhere in the world.
Links: www.ferrybuildingmarketplace.com
2,351 views