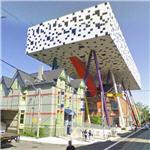 By kjfitz @ 2009-10-07 11:14:00
@ 43.652322, -79.390588
Toronto, Canada (CA)
In 2004 work was completed on a new expansion. The "Sharp Centre for Design", designed by architect Will Alsop, of Alsop Architects, in a joint venture with Toronto-based Robbie/Young + Wright Architects Inc. It consists of a box four storeys off the ground supported by a series of multi-coloured pillars at different angles and is often described as a tabletop. The $42.5 million expansion and redevelopment has received numerous awards, including the first-ever Royal Institute of British Architects Worldwide Award, the award of excellence in the "Building in Context" category at the Toronto Architecture and Urban Design Awards, and was deemed the most outstanding technical project overall in the 2005 Canadian Consulting Engineering Awards.
Links: en.wikipedia.org
1,403 views