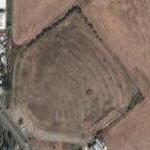 By kjfitz @ 2005-08-08 11:23:24
@ 42.298524, -122.844422
Medford, Oregon (OR), US
Medford's Starlite drive-in opened June 7, 1949 with a YMCA benefit show of "A Letter to Three Wives" starring Jeanne Crain, Linda Darnell & Ann Southern. Admission was 35 cents per person with children under 10 free. The Starlite closed in 1987. The property and buildings then became a target for vandals and a refuge for the homeless. Reflecting the deteriorating use of the drive-in, the acreage and its structures served as a place for transients to drink and for a local man to end his life. Iin 1996, an effort to refurbish and reopen the Starlite was led by a local developer. These plans never materialized and in August 2002, a fire destroyed what was left of the last standing building - the two story projection room and snack bar. The vacant acreage has recently been rezoned and the first tenant will continue the Starlite's automotive use by selling tires. The last remnant of the old drive-in is the vandalized sign. "The Starlite Drive-in: the end of an era." written by Sharstin Brannock, Southern Oregon Historical Society.
Links: www.drive-ins.com
877 views