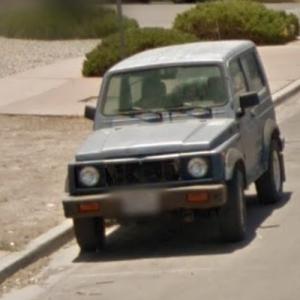 By Carrera @ 2019-02-23 23:06:33
@ 32.9022433, -105.9590531
Alamogordo, New Mexico (NM), US
The Suzuki Jimny off-road SUV was brought to the U.S. market in 1985 for the 1986 model year as the Samurai, and sales of the $6,200 truck were modest at first with 47,000 units moving off dealer lots, and it even saw popularity among off-roaders for its capabilities, reliability and performance for its 1.3 liter 63 hp I4. However, its reputation was soon scarred when a scathing 1988 review from Consumer Reports declared it unsafe and rollover-prone, and a re-tuned suspension in the middle of that year didn't help either, making sales plummet significantly until its discontinuation in 1995, when the Sidekick/Vitara superseded it for the North American market. The lawsuit from Suzuki filed in 1996 being dragged for a decade eventually sullied Suzuki's name from there, finally exiting the Canadian market in 2010 and the U.S. 2 years later. The car is still sold in other international markets, and a modified SJ413 unit even held the record for the highest altitude set in a four-wheeled vehicle, 21,492 feet in Chile's Ojos del Solado located in the Andes Mountains.