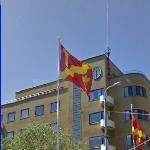 By DjApassi @ 2010-02-10 09:40:21
@ 61.497969, 23.763807
Tampere, Finland (FI)
Tampere is a city in southern Finland located between two lakes, Näsijärvi and Pyhäjärvi. Since the two lakes differ in level by 18 metres (59 ft), the rapids linking them, Tammerkoski, have been an important power source throughout history, most recently for generating electricity. Tampere is dubbed the "Manchester of Finland" for its industrial past as the former center of Finnish industry, and this has given rise to its Finnish nickname "Manse" and terms using that such as Manserock.

The Tampere region, called Pirkanmaa, which includes outlying municipalities, had around 470,000 residents, of which 230,000 were employed, and a turnover of 25 billion euros in 2007.

Tampere is the most populous inland city in any of the Nordic countries. The city has a population of 211,544,[2] with close to 300,000 people in the conurbation and over 340,000 in the metropolitan area.[8] Tampere is the third most-populous municipality in Finland, after the Greater Helsinki municipalities of Helsinki and Espoo. Helsinki can be reached in 1.5 hours by train and 2 hours by car. The distance to Turku is approximately the same. Tampere airport is the third-busiest airport in Finland, with 800,000 passengers annually.
Links: en.wikipedia.org
727 views