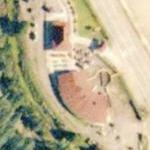 By kjfitz @ 2008-02-05 14:11:17
@ 39.603006, -105.225205
Indian Hills, Colorado (CO), US
Tiny town was created at the site of the Denver-Leadville stagecoach stop in a scenic mountain canyon southwest of Denver in 1915. That's when moving-company owner George Turner began constructing one-sixth-sized buildings with a turn- of-the-century flavor to delight his young daughter. In 1920 the town was opened to the public. In just five years, it became one of Colorado's top attractions.

By 1939, the "World Famous" Tiny Town Railway was in operation. By then Tiny Town was creating thousands of special memories for kids of all ages.

But the historic town was not without its setbacks of fires, floods and changing economic times that often kept this special place on the edge of extinction.

So in 1988, volunteers adopted the resurrection of Tiny Town as a civic, charitable project. Individuals from the entire state refurbished original buildings, created new structures and got the railroad up and running again.

The Tiny Town Foundation was created in 1990 to establish Tiny Town as a not-for-profit effort and ensure the cherished village would never be threatened again. Each year the foundations has been proud to donate a portion of the proceeds to various area charities.
Links: www.tinytownrailroad.com
978 views