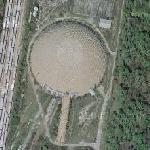 From the outside, the design of the dome makes it seem smaller than it actually is. Its diameter is 384 feet, making it big enough to house a baseball field. It's 125 feet high, weighs 620 tons and is 110,000 square feet. Each of the 321 welded steel hexagons weighs roughly 2 tons.

Inside the dome is another dome, and the second one surrounds a control tower that is 80 feet high. The second dome, once covered with glass, served no purpose.

The building has changed hands and now is owned by KCS Rail.
Links: www.bestofneworleans.com
1,612 views

Thank you for giving credit where it is due. I believe the description reads "the world's first large industrial use of the geodesic concept," not that it was designed by Fuller.

Regrettably, this structure no longer stands.