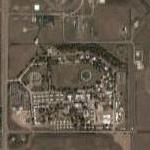 By AKpilotEMT @ 2005-11-08 14:35:32
@ 46.767823, -100.757546
Bismarck, North Dakota (ND), US
Site of the second Fort Abraham Lincoln. Many buildings built between 1900 and 1910. During World War II this was an internment camp for German and Japanese aliens. United Tribes Technical College was first founded in 1969 by an intertribal organization, the United Tribes of North Dakota Development Corporation. It is a nonprofit corporation chartered by the State of North Dakota and operated by the five tribes wholly or in part in North Dakota. Those tribes are the Mandan, Hidatsa, Arikara Nation, the Spirit Lake Tribe, the Sisseton Wahpeton Sioux Tribe, the Standing Rock Sioux Tribe and the Turtle Mountain Band of Chippewa. The college is home to the annual United Tribes International Powwow (www.unitedtribespowwow.com.)
793 views