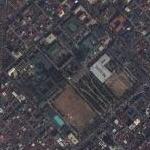 By kjfitz @ 2011-03-04 10:46:32
@ 14.610085, 120.989524
Manila, Philippines (PH)
The Pontifical and Royal University of Santo Tomas, The Catholic University of the Philippines is a private Roman Catholic university run by the Order of Preachers in Manila. Founded on April 28, 1611 by archbishop of Manila Miguel de Benavides, it has the oldest extant university charter in the Philippines and in Asia. and is one of the world's largest Catholic universities in terms of enrollment found on one campus. UST is also the largest university in the city of Manila. As a Pontifical University in Asia, UST is the only university to have been visited by two popes three times.
Links: en.wikipedia.org
2,817 views