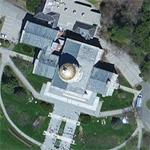 Designed in 1857, the Vermont State House is an exquisite example of Greek Revival architecture, particularly as this style was applied to important institutional buildings. This well-preserved capitol building is a reflection of the nationwide construction of state capitols throughout the first half of the 19th century. Their designs were a conscious reflection of the nation's Capitol. It was hoped that the allusion to this familiar architectural image would foster the same trust and loyalty for State governments that citizens already had for the nation's.

Today the State House is the focus of the Montpelier Historic District. The current state house was preceded by several others at the site. The most significant was that designed by Montpelier resident, Ammi B. Young, and built from 1833-38. Young was the Supervising Architect of the U. S. Treasury Building, and one of 19th century America's leading architects. Young designed a two story building with cruciform plan, low saucer dome, and portico, using locally quarried Barre granite for much of the building's exterior. In January of 1857, most of the building was destroyed by fire, including the timber interior and dome. Young's Doric portico survived as did some of the granite walls. These elements were incorporated into the current Vermont State House, which followed the plans of architect Thomas Silloway. Silloway's design called for the enlargement of the previous building by one bay at either end of the facade. His more elaborate high dome is sheathed with copper and covered with gold leaf. A statue of Ceres, the goddess of agriculture, stands atop the dome, symbolizing the importance of that industry to the state. Today, the statehouse stands virtually as completed in 1859 and includes many of the original furnishings, such as the Senate Chamber's 30 black walnut desks and chairs first used by the 30 members of the 1859 Vermont Senate. The building underwent a major restoration in the 1990s and continues to function as it was originally intended.
Links: www.cr.nps.gov
1,192 views