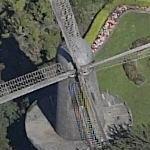 
1902
The Dutch (North) Windmill was completed at a cost of $25,000. Alpheus Bull Jr., a prominent San Franciscan, designed the North Windmill. The Fulton Engineering Company received the bid for the ironwork, and Pope and Talbot Lumber Company donated sails (“spars”) of Oregon pine.

There is another windmill to the south but it is currently dismantled for renovation.
Links: www.goldengateparkwindmills.org
720 views