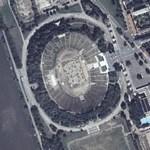 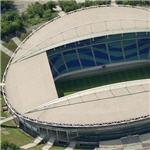 There are bridges built over the old stadium to connect with the new stadium. The roof has an integrated floodlight design and is designed to provide supierior acoustics. The lawn size is 80x120, the actual playing field is 68x105. It has been integrated into the area surronding the stadium by large amounts of trees and other greenery.
Links: en.wikipedia.org
912 views