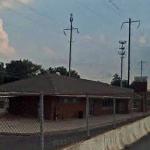 By kkeps @ 2013-12-12 10:41:58
@ 39.508831, -76.163209
Aberdeen, Maryland (MD), US
Aberdeen Station is a train station in Aberdeen, Maryland on the Northeast Corridor. It is served by Amtrak's Northeast Regional and the MARC Penn Line. The station was originally built by the Philadelphia, Wilmington and Baltimore Railroad approximately in 1898, and inherited by the Philadelphia, Baltimore and Washington Railroad. The current station is a modern structure built in 1943 by Lester C. Tichy for the Pennsylvania Railroad, and located at 18 East Bel Air Avenue at the intersection of Pulaski Boulevard (US 40) and West Bel Air Avenue (MD 132). It contains a 1960s-style pedestrian tunnel, with one of the entrances located at the former north station house. It also contains a pedestrian bridge built in 1982. Aberdeen was also served by an 1886-built Baltimore and Ohio Railroad station along what is now the CSX Philadelphia Subdivision just north of this one on West Bel Air Avenue.
Links: en.wikipedia.org
705 views