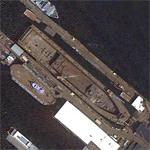 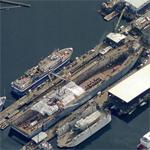 By DivSock @ 2013-01-06 23:09:56
@ 47.6339158, -122.32880296
Seattle, Washington (WA), US
Operated in Pacific Theater during the war, mother-ship to first USN bathyscaphe Trieste II in the 1960's which searched for missing subs USS Thresher & USS Scorpion. Trieste II is now preserved as a museum ship at the Naval Undersea Museum, Keyport Washington, not far from ARD-20. The drydock has been operated by various Seattle shipyards for several decades. My dive crew assisted with landing both a tugboat and research vessel on the docking blocks on 4 Jan 2013.

On Bing Maps a partially sunken houseboat is visible on the lakeshore just north of the shipyard, surrounded by oil sorbent boom.
Links: en.wikipedia.org
443 views