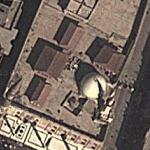 By Mike1989 @ 2013-04-06 14:33:23
@ 30.047764, 31.263327
Cairo, Egypt (EG)
Al-Hussein Mosque (Arabic: مسجد الإمام الحسين‎, Egyptian Arabic: جامع سيدنا الحسين) ; alternative transliterations: Husayn, Hussain, Husayn, Hussayn; also prefixed by the honorific title Sayyidna) is a mosque built in 1154 and located in Cairo, Egypt, near the Khan El-Khalili bazaar. It is named for the grandson of Muhammad, Husayn ibn Ali, whose head is believed by Fatimid Shia/Dawoodi Bohra to be buried on the grounds of the mosque. Many Shī‘ah Muslims believe that the head of Husayn ibn Ali is with his body in the Imam Husayn Mosque in Karbala. The mosque, considered to be one of the holiest Islamic sites in Cairo, was built on the cemetery of the Fatimid caliphs, a fact that was later discovered during the excavation. The mausoleum (dating back to 1154) is the oldest part of the complex. The current building was built in the 19th century, and was influenced by Gothic Revival architecture.
Links: en.wikipedia.org
762 views