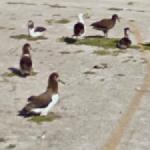 By Mike1989 @ 2012-10-11 04:48:12
@ 28.196512, -177.39411
Midway Island, United States Minor Outlying Islands (UM)
Albatrosses, of the biological family Diomedeidae, are large seabirds allied to the procellariids, storm-petrels and diving-petrels in the order Procellariiformes (the tubenoses). They range widely in the Southern Ocean and the North Pacific. They are absent from the North Atlantic, although fossil remains show they once occurred there too and occasional vagrants are found.
Links: en.wikipedia.org
323 views