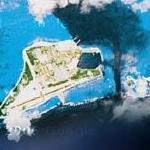 Midway Atoll (also known as Midway Island or Midway Islands, Hawaiian: Pihemanu) is a 6.2 square kilometer atoll located in the North Pacific Ocean (near the northwestern end of the Hawaiian archipelago) at 28°13′ N 177°22′ W, about one-third of the way between Honolulu and Tokyo. It is less than 150 miles east of the International Date Line and is about 2,800 miles west of San Francisco and 2,200 miles east of Japan. It consists of a ring-shaped barrier reef and several sand islets. The two significant pieces of land, Sand Island and Eastern Island, provide habitat for hundreds of thousands of seabirds.

The atoll, which has no indigenous inhabitants, is an unincorporated territory of the United States, designated an insular area under the authority of the U.S. Department of the Interior. It is a National Wildlife Refuge administered by the U.S. Fish and Wildlife Service. The visitor program closed in January 2002 and there are no facilities at the present time for receiving visitors. However, visitors able to provide their own transportation can contact the refuge manager for information about visiting the atoll. The economy is derived solely from governmental sources. All food and manufactured goods must be imported.

Midway lies nearly halfway between North America and Asia. It also lies almost halfway around the earth from Greenwich, England.

Midway is best known as the location of the Battle of Midway, fought in World War II on June 4, 1942. The nearby United States Navy defeated a Japanese attack against the "Midway Islands," marking a turning point in the war in the Pacific theater.
Links: en.wikipedia.org
9,236 views