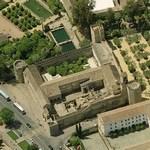 By DonMartini @ 2006-10-06 12:04:57
@ 37.876884, -4.781705
Córdoba, Spain (ES)
It is a building of military character that was built following gothic style by order of King Alfons XI. Here the Catholic Kings resided approximately 8 years, during the period of the Spanish Reconquest. It was here were they received Columbus prior to his voyage to the Americas. Its elegant gardens and its contents are magnificent and priceless, with Roman mosaics and sarcophaguses of the 2nd and 3rd centuries. It also offers an excellent view to the rover and the Roman Bridge, that crosses the Guadalquivir River. As part of the complex, it has several towers with lodgings that are covered with pointed arches, such as the Tower of the Homage or the Lions’ Tower facing the garden of the Martyred Saints. It also maintains the baths, of the caliph tradition, located under the Mosaics’ Hall, which nowadays is used to celebrate weddings.
Links: en.wikipedia.org
1,423 views