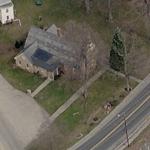 After floods from nearby Rondout Creek damaged the building in the mid-1950s, the church abandoned it. It also survived a fire in the mid-1970s. A newly-formed local library district was created to restore it for use as a library. In 1986 it was added to the National Register of Historic Places.
Links: en.wikipedia.org
534 views