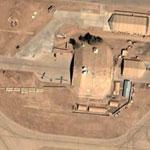 The only Predator unit in Iraq has a 55-person crew that includes medics, comptrollers, contractors, and communications, weapons, fuels and aircraft-generation specialists. They bring their own shelters, tents and vehicles.

The sleek 27-foot-long UAV is comparable in wing span to an F-16 Fighting Falcon at 48 feet. Its electrical optical infrared cameras are the heart of the system, said Major Lee. "It is a multitargeting system."

The cameras allow the aircraft to capture images even through clouds. These abilities give the Predator an advantage over the U-2 and Global Hawk aircraft which are used for strategic reconnaissance.

With their four-cylinder engines, the UAV can fly nearly 20 hours from altitudes up to 25,000 feet, providing up-to-the second information to those who need it the most -- soldiers on the ground.

Each crew -- a pilot and a sensor operator or co-pilot -- flies about three times a day. The pilot is a rated pilot. Currently, the unit has two fighter pilots and a bomber pilot to fly the craft. The sensor operators are imagery analysts in the Air Force on flying status.

From a ground-control station, the pilots maneuver the Predator just like any other aircraft. Pilots can comply with headings, altitudes and airspeeds directed by air traffic control, just as if they were in the cockpit.

While in the ground station, the two-person crew watches a video monitor that displays images transmitted from the Predator’s nose-mounted camera. All missions are recorded, and information is disseminated to various intelligence units worldwide.
Links: fas.org, www.flickr.com
2,272 views