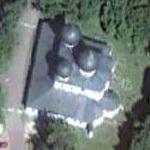 By valeryan @ 2009-02-10 06:11:32
@ 58.540311, 31.287839
Velikiy Novgorod, Russian Federation (RU)
The Antoniev Monastery (St Anthony's Monastery, Russian: Антониев монастырь) was one of the most important monasteries in medieval Novgorod the Great; it stands along the right bank of the Volkhov River north of the city centre.

The monastery was founded in 1117 by St Anthony of Rome (Antonii Rimlianin), who, according to legend, flew to Novgorod from Rome on a rock. Antonii was consecrated hegumen of the monastery in 1131 by Archbishop Nifont. The Church of the Nativity of the Mother of God, like the Church of St. George in the Yuriev Monastery, is one of the few three-domed churches in Russia. It was founded by Antonii in 1117 and completed in 1119. There are some frescoes from the Middle Ages still extant, most notably in the apse, but most are from the sixteenth or seventeenth centuries and are in some disrepair.
Links: en.wikipedia.org
404 views