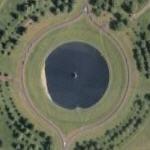 By kjfitz @ 2008-10-31 14:11:08
@ 51.409894, -0.336478
London, United Kingdom (GB)
This magnificent 17th century fountain in Bushy Park was the centrepiece of Sir Christopher Wren's grand approach to Hampton Court Palace. The design is in part attributed to Inigo Jones and is referred to locally as the 'Diana' Fountain. The fountain is actually believed to represent the Goddess's nymph, Arethusa, but there is still much debate to be had upon what is its most appropriate name. Recognised by English Heritage as one of the most important groups of sculpture in Britain, the fountain is adorned by a unique collection of bronzes by French royal sculptor Hubert Le Sueur. Work on the fountain will repair the stonework, pipework and the bronze statuary and ultimately bring the fountain back into full operation.
Links: www.royalparks.org.uk
689 views