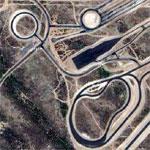 The Arizona Proving Ground is operated year round. The climate is of a desert type with low annual rainfall and low relative humidity. Daytime temperatures are high throughout the summer months. The winters are mild. Nighttime temperatures frequently drop below freezing during the three coldest months, but the afternoons are usually sunny and warm.

The facility is conveniently located on the outskirts of Phoenix, and offers complete services for vehicle testing to outside companies. Outside parties can have testing conducted by APG personnel or can directly rent the use of the test surfaces for their own staff. Office space, garage areas and event planning is also offered.
Links: www.testprofessionals.com
6,935 views