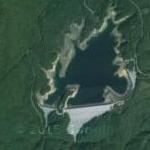 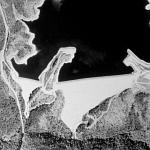 By kjfitz @ 2006-04-22 18:59:16
@ 35.009999, -83.016
Bad Creek, South Carolina (SC), US
The Bad Creek Hydroelectric Station is a 1,065-megawatt pumped-storage facility located in Oconee County, eight miles north of Salem, South Carolina. The four-unit station began generating electricity in 1991, and is the largest hydroelectric station on the Duke Energy system. It is named for the two streams, Bad Creek and West Bad Creek, which were dammed to create the Bad Creek reservoir.

The Bad Creek facility two reservoirs (or lakes) to generate electricity: an upper reservoir and a lower reservoir. Water stored in an upper lake is released into underground power tunnels. The water rushes down the tunnels, driving huge turbines, which are underground at the base of a dam. The spinning turbines are connected to large generators, which produce the electricity. The water then flows through draft tubes into a lower lake.

A pumped-storage hydroelectric station uses the same water over and over again, making more efficient use of water resources. When demand for electricity is low, operators can refill the lake, as if they were “recharging” a battery. Using power from other generating stations, the generators act as electric motors spinning the huge turbines backward. This pumps water back up the power tunnels into the upper lake. Water is generally pumped back to the upper reservoir at night and on weekends.
Links: www.duke-energy.com
2,998 views