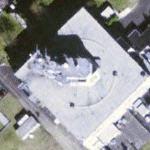 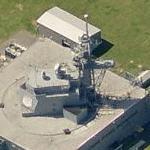 The facility shown below is known as CSEDS, or the Combat System Engineering Development Site. It is used primarily to test the world's most powerful and effective sea based radar known as the Aegis Radar system. The facility below is also the only landlocked commissioned US Naval vessel which is designated as the USS Rancocas and houses an entire crew of naval personnel.

While many of today's passing motorists are amazed by the landlocked ship's bridge, 30 years ago drivers were equally mesmerized by the giant "golf ball" at the same location.

From 1960 to 1975, a 15-story, 140-foot-wide, snow-white radar dome was a landmark. The radar station was built by Radio Corp. of America and operated by the Air Force as a prototype of a ballistic-missile early warning system.

The "golf ball" housed an 84-foot-wide antenna. The housing could protect the antenna from winds up to 180 m.p.h. and temperatures of 65 degrees below zero.

In 1972, some residents in Willingboro claimed the radar station caused buzzing sounds in their televisions, radios and intercoms.

The station was used to track satellites as the Cold War was winding down and was labeled obsolete as more sophisticated radar systems were developed. The "golf ball" was replaced by the ship's bridge in 1976.
Links: www.philly.com
13,893 views