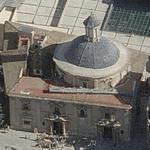 By adrbr @ 2008-03-22 19:15:08
@ 39.476317, -0.374888
Valencia, Spain (ES)
The name Nuestra Señora de los Desamparados means "Our Lady of the Forsaken" or "Our Lady of the Homeless." She was originally the patron saint of a 15th-century society dedicated to the care of the homeless and mentally ill in Valencia. Some time after 1493 the society commissioned the santo seen at left and housed it in a small chapel, which was replaced in 1652 by a substantial basilica.

Over the years Nuestra Señora de los Desamparados came to be the object of general veneration in Valencia, and she is now the official patron saint of the city, with a major festival on the second Sunday of May. In March participants in the "Fallas" celebration bring her flowers.