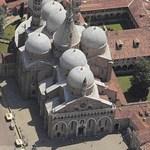 By DonMartini @ 2006-12-30 07:57:21
@ 45.401335, 11.881709
Padua, Italy (IT)
The most famous of the Paduan churches is the Basilica di Sant'Antonio da Padova, locally simply known as "Il Santo". The bones of the saint rest in a chapel richly ornamented with carved marbles, the work of various artists, among them of Sansovino and Falconetto; the basilica was begun about the year 1230 and completed in the following century; tradition says that the building was designed by Nicola Pisano; it is covered by seven cupolas, two of them pyramidal. On the piazza in front of the church is Donatello's magnificent equestrian statue of the Venetian general Gattamelata (Erasmo da Narni), which was cast in 1453, the first full-size equestrian bronze cast since antiquity; it was inspired by the Marcus Aurelius equestrian sculpture at the Capitoline Hill in Rome.
Links: en.wikipedia.org
1,281 views