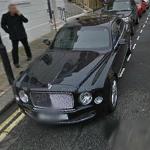 By kuressaare @ 2012-07-19 08:50:08
@ 51.499452, -0.166848
London, United Kingdom (GB)
The new Bentley Mulsanne is a high-end luxury car produced by Bentley Motors Limited in the United Kingdom. The name is derived from Bentley's historical racing pedigree, which included five victories at the 24 Hours of Le Mans — the Mulsanne Straight being the stretch of the Le Mans racing circuit where cars reach their highest speeds.