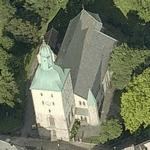 By adrbr @ 2008-04-21 04:30:59
@ 60.394303, 5.330167
Bergen, Norway (NO)
Bergen Cathedral (Bergen Domkirke) is the seat of the Diocese of Bjørgvin. Located in the city centre of Bergen, Norway, it was first mentioned in literature in 1181. During the reign of king Haakon IV of Norway, a Franciscan monastery was established near the church, and Bergen Cathedral, at the time called Olavskirken was incorporated in it. The church burned in 1248 and 1270, but was reconstructed after both fires. In 1463, it burned again, but this time it was not reconstructed until the 1550s, despite becoming cathedral in 1537.

After the fires of 1623 and 1640, Bergen Cathedral received its current general appearance. The steeple on the nave was tore down, and the current tower was built. During the renovation in the 1880s by architect Christian Christie, the roccoco interior was replaced to give the interiors back their former Medieval appearance.
960 views