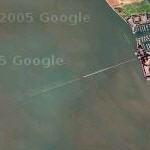 The Berkeley Pier is a pier in Berkeley, California. The pier as constructed extended three and a half miles into the San Francisco Bay from the end of University Avenue, but is today approximately two and a half miles (4.10 km)in length; however, only the first 3000 ft (0.9 km) are maintained and open to the public.

The Berkeley Pier was constructed in 1926 to provide a deep water landing for an auto ferry to the Hyde Street Pier in San Francisco. Between 1926 and 1937, it served as an integral part of US Highway 40. The ferry line shut down in 1939, about two years after the Bay Bridge opened. The portion of the pier closest to shore was converted to recreational use, while the remainder was left to decay.
Links: en.wikipedia.org
1,950 views