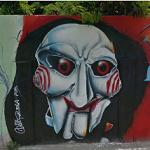 By Mike1989 @ 2013-06-15 08:51:52
@ -3.740446, -38.540625
Fortaleza, Brazil (BR)
Billy is a puppet that has appeared in the Saw franchise. It was used by the series' main antagonist John Kramer, a.k.a. Jigsaw, to communicate with his test subjects by delivering recorded messages, often appearing on a television screen or occasionally in person to describe the details of the sadistic traps and the means by which the test subjects could survive. Viewers have sometimes incorrectly identified the puppet itself as Jigsaw, because of its presence and connection to the killer.
Links: en.wikipedia.org
634 views