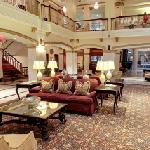 By Mike1989 @ 2012-12-12 14:06:40
@ 41.522707, -90.572191
Davenport, Iowa (IA), US
The Blackhawk Hotel is an eleven-story brick and terra cotta building located in Downtown Davenport, Iowa, United States. It has returned to its original name Hotel Blackhawk. The Blackhawk has been host to several high-profile people including Presidents Barack Obama, Herbert Hoover, Richard Nixon, writer Carl Sandburg, and boxer Jack Dempsey. Actor Cary Grant was staying at the Blackhawk Hotel when he died in Davenport. The hotel named rooms 412–414 the "Nixon Suite". Big bands such as Guy Lombardo and Stan Kenton played at the Blackhawk on many occasions. It has been listed on the National Register of Historic Places since 1983.
Links: en.wikipedia.org
596 views