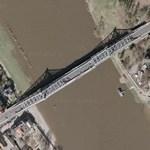 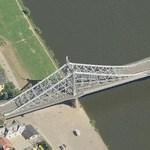 By DonMartini @ 2006-04-29 13:02:14
@ 51.053285, 13.810501
Dresden, Germany (DE)
The Blue Wonder (Ger. Blaues Wunder) is a cantilever truss bridge over the Elbe river in the German city of Dresden. It connects Dresden-Blasewitz and Dresden-Loschwitz, two villa quarters, once the most expensive living area in Europe. It is located close to Dresden Standseilbahn (funicular railway) and also the oldest suspension railway (Dresden Schwebebahn), as well as being near to the Dresden TV Tower.

The bridge was completed in 1893; in the 19th century it was a masterpiece of technology to build a bridge of this length without pillars supporting it. Today its technology is less of a wonder but it is a much-loved symbol of the city. The "blue" in the name comes from the colour of the bridge. The saying goes that the bridge was originally painted green, but that the weather (or some say the sun) turned the bridge blue. In fact, a number of news articles and other sources show that the original colour was really blue; when the bridge was opened for the first time, it was already hailed as the "Blue Wonder". In addition, the name is a pun, since the meaning of the phrase "ein blaues Wunder erleben" is "to experience a nasty surprise".

In 1945 various different people saved the bridge from being destroyed by the Nazis, all independently from one other and under danger of death.

The river under the bridge is the home of the world's biggest paddle steamer fleet, the surrounding area of the Elbe meadows (19.3 km²) were declared to be a cultural world heritage by the UNESCO in 2004.
784 views