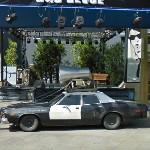 By Rene73 @ 2009-12-12 12:24:39
@ 34.138011, -118.354955
Burbank, California (CA), US
The Bluesmobile is a 1974 Dodge Monaco sedan that was prominently featured in the 1980 film, The Blues Brothers. In the film, it is described as a used Mount Prospect, Illinois police car that replaced a Cadillac, which Elwood Blues traded for a microphone. The Bluesmobile was equipped with the "440 Magnum" squad car package that was offered by Dodge for the Monaco. Its license plate was an Illinois plate reading, "BDR 529", a tribute to the Black Diamond Riders of Toronto, Canada at 529 Jarvis Street.

In describing the car to his brother, Jake, Elwood said, "It's got a cop motor, a 440-cubic-inch plant. It's got cop tires, cop suspension, cop shocks. It's a model made before catalytic converters so it'll run good on regular gas." The Bluesmobile has the ability to perform seemingly impossible stunts, such as jumping over an open drawbridge, flipping backwards in midair and even "flying" for very brief periods of time.
Links: en.wikipedia.org
1,150 views